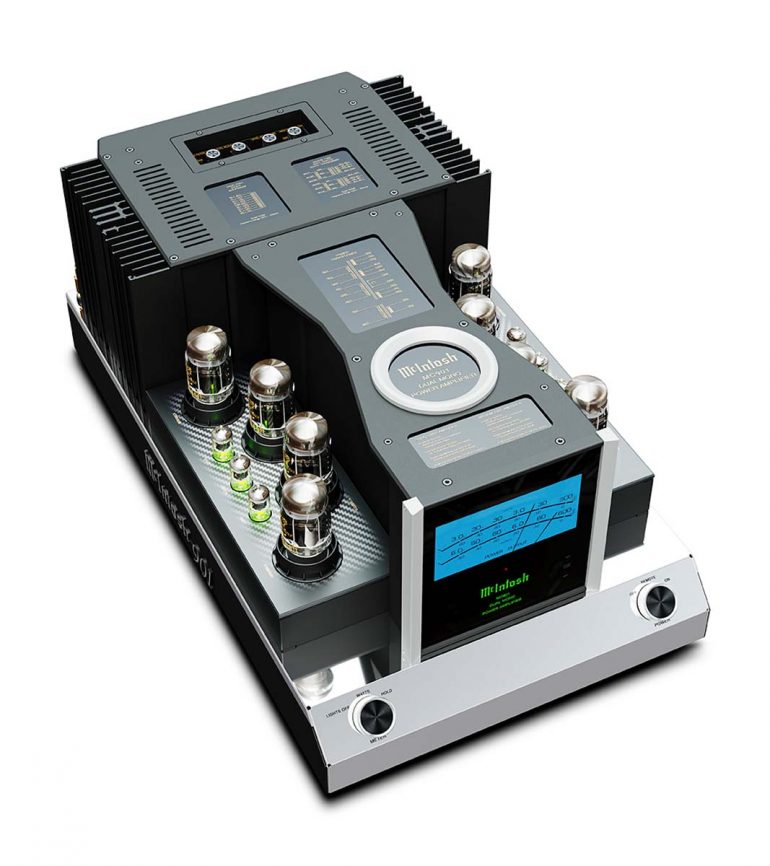 A one-of-a-kind, ultimate solution for bi-amping loudspeakers from McIntosh: a 300 Watt vacuum tube amplifier and a 600 Watt solid state amplifier on one chassis 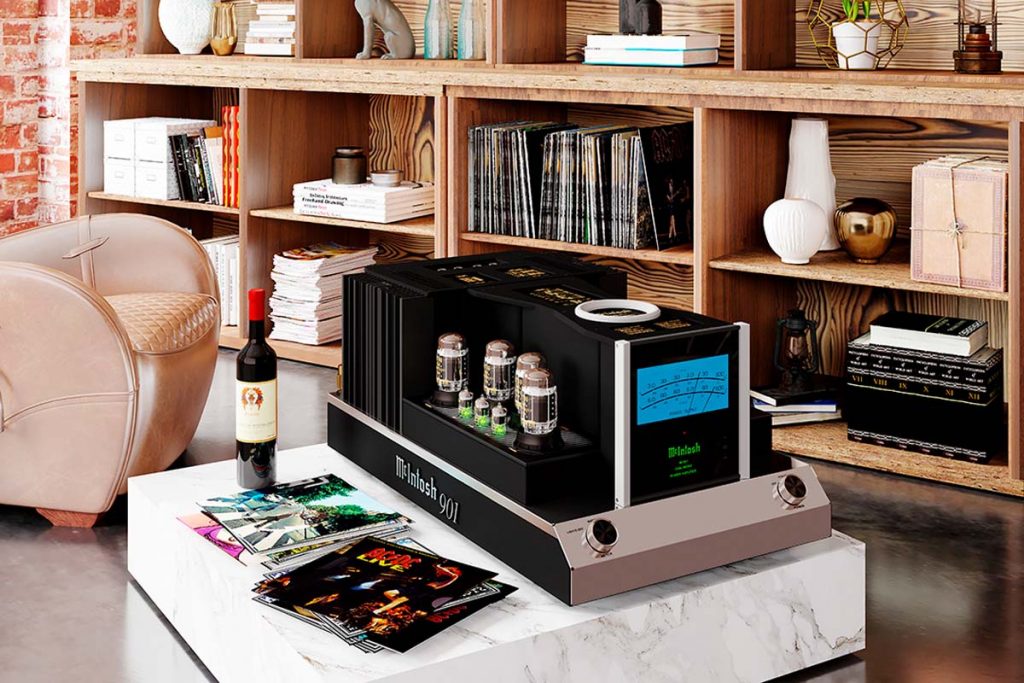 McIntosh, the global leader in prestigious home entertainment and ultimate-quality audio for 70 years, is proud to announce the MC901 Dual Mono Amplifier.
Legendary home audio company McIntosh has been perfecting vacuum tube amplifiers since the 1940s and solid state amplifiers since the 1960s. Their amplifiers have been used at many historic events including presidential inaugurations and Woodstock, as well as in landmark sound systems like the Grateful Dead’s Wall of Sound and Despacio. From that heritage comes a truly one-of-a-kind home audio amplifier only they could dream of, design and build as the ultimate solution for bi-amping loudspeakers: the new McIntosh MC901 Dual Mono Amplifier.

The MC901 is a monoblock amplifier that drives a single speaker. But it is unlike any other monoblock amplifier. What makes the MC901 so unique is that it’s two amplifiers combined into one. Adding to the uniqueness is that each amplifier is of differing design philosophies: the MC901 consists of a 300 Watt vacuum tube amplifier attached to a 600 Watt solid state amplifier on one unified chassis.

The 300 Watt vacuum tube portion powers the speaker’s mid and upper drivers via eight KT88 output tubes, plus four 12AT7 and two 12AX7A signal tubes; the solid state section delivers 600 Watts of dedicated power to the power hungry woofers. The 300 Watt vacuum tube amp in the MC901 uses McIntosh’s patented Unity Coupled Circuit output transformer – the same technology McIntosh was founded on in 1949 – to deliver its full 300 Watts into almost any speaker regardless if it has 2, 4 or 8 Ohm impedance. Similarly, the 600 Watt solid state amp delivers its full 600 Watts into a 2, 4 or 8 Ohm impedance speaker via McIntosh’s Autoformer™ technology. 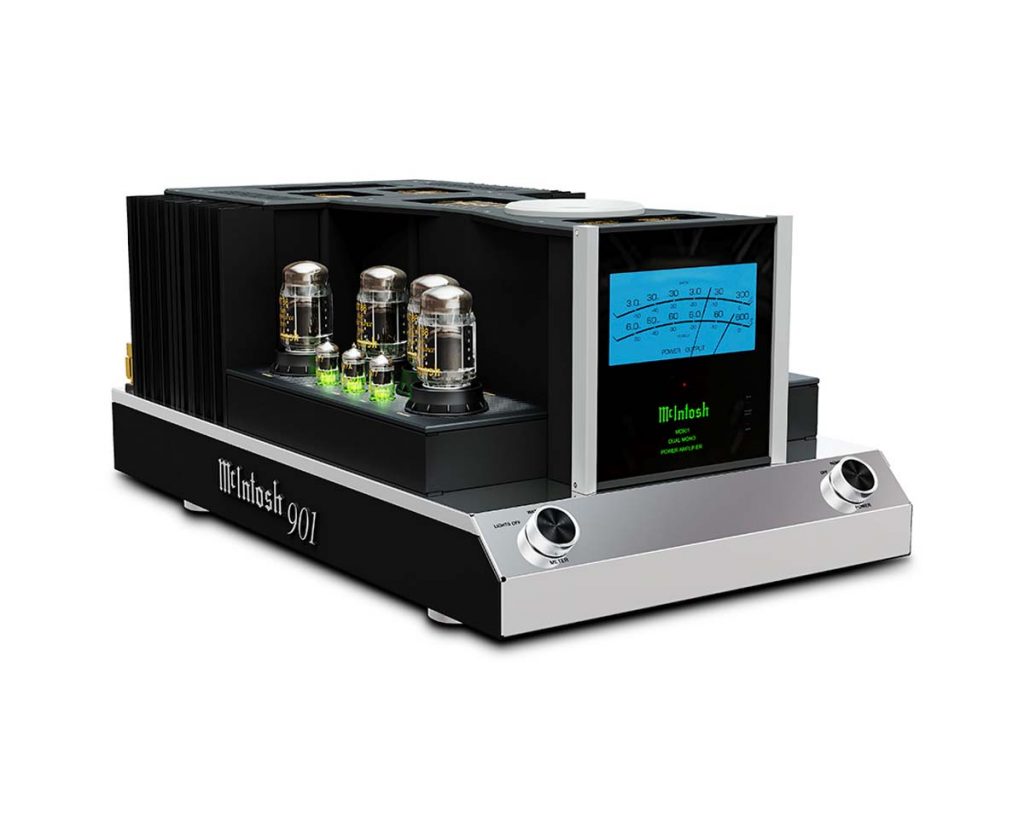 Vacuum tubes do not perform at their best when they are amplifying lower frequencies that are not being used by the loudspeaker. With the MC901, the vacuum tube amp will not be burdened with low end reproduction as the solid state section will drive these frequencies. The two amplifier sections of the MC901 are designed to work together in a synergistic relationship and are specifically engineered to assure that each section only amplifies its intended frequencies. Each amplifier section has its own discrete power supply so neither siphons power or performance away from the other. All of this results in easy bi-amping with unparalleled performance and sound reproduction from the speakers.

Prior to the MC901, bi-amping a speaker required two separate amplifiers. It also required an external crossover, along with a lot of trial and error, to properly configure the two detached amplifiers so they worked together as best as possible. The MC901 solves this issue thanks to its internal, adjustable crossover with the controls easily accessible on the top of the unit. These adjustable crossover filters allow the user to optimize the performance of both amplifier sections to their listening preferences. Relative gain levels for each amplifier section can be adjusted from -6dB to + 3dB. A direct feed can also be connected to each amplifier section, thus bypassing the filters.

Like virtually all McIntosh amplifiers, the MC901 features an iconic “McIntosh Blue” Watt meter, which has come to be recognized around the world as a symbol of quality audio. And just like the MC901 itself is a new design, so too is its meter with the introduction of McIntosh’s new DualView™ Power Output Meter. The DualView meter features two of McIntosh’s traditional, fast responding mechanical meters stacked above and below each other in a single meter window; one meter is dedicated to the 300 Watt vacuum tube amp and the other to the 600 Watt solid state amp. Each meter operates independently of the other and displays the real time power reading of each amplifier section. 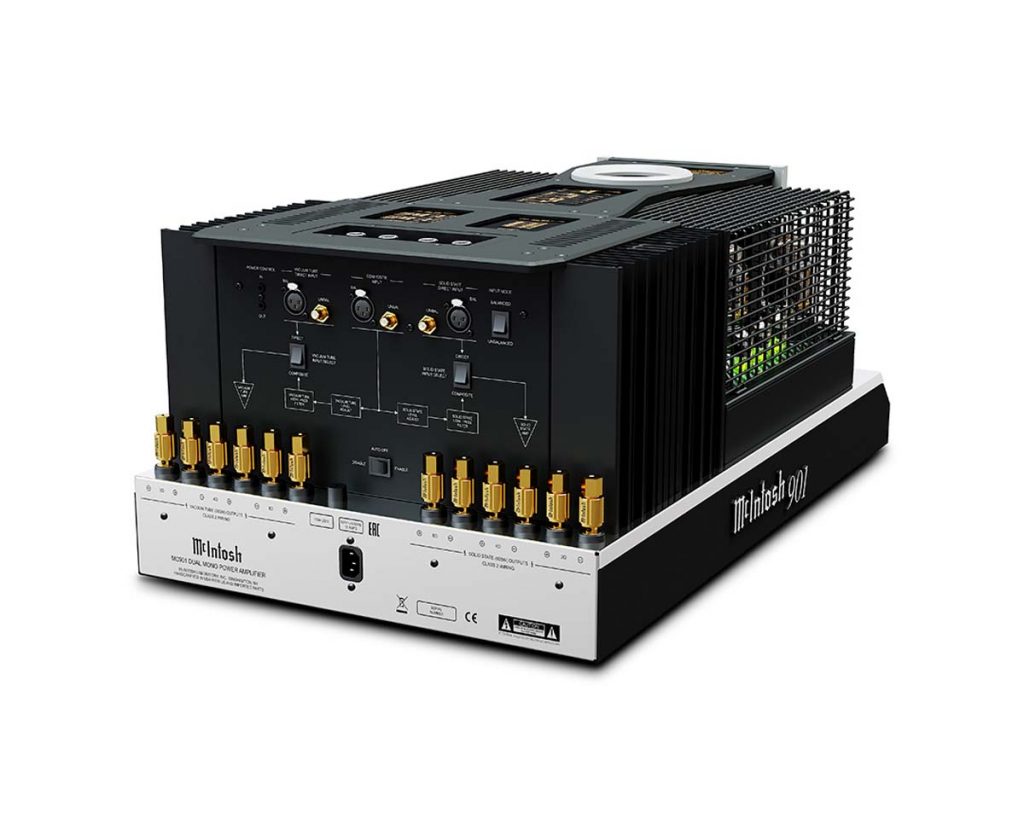 A brand new technology in the 300 Watt vacuum tube amplifier section of the MC901 is Power Guard Screen Grid Sensor™ (SGS). Power Guard SGS™ helps prevent premature vacuum tube failure by monitoring the screen grid current in the KT88 output vacuum tubes. If the current becomes too high, a circuit in Power Guard SGS is activated which then dynamically attenuates the input signal in real time to keep the vacuum tubes operating at safe levels.

Although the MC901 may look different than any McIntosh product before it, a quick glance reveals signature McIntosh design cues. The top is highlighted by a series of diagrams printed on glass that outline the basic circuitry and specifications of the unit, along with a glass nameplate trimmed with a circular aluminum ring that’s finished to match the front panel endcaps. The sides are adorned with vintage McIntosh-styled die cast aluminum name badges. Two classic McIntosh knobs are located on the front of the polished stainless steel chassis, and direct LED backlighting illuminates the DualView meter, McIntosh logo and the lettering on the black glass front panel. The uncompromising level of fit and finish that is expected of a McIntosh product completes the MC901. 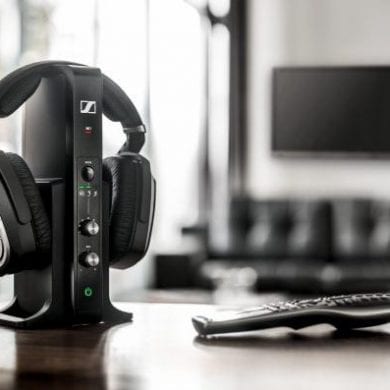